WHAT YOU NEED TO KNOW ABOUT UBO #3: Multi-layered Corporate Structures

Compliance officers and regulators the world over are challenged with one ostensibly simple task. Identifying the Ultimate Beneficial Owner (UBO) of the organization they are vetting. To the uninitiated, pinpointing the people at the heart of a given company may seem like a clear-cut exercise. After all, companies need to be registered with the government in their relevant country or territory so surely it’s just a matter of finding the correct information, providing you have the right access.

When a company is listed publicly, it may be relatively straightforward to identify the map of the UBO for each entity. The complexity lies in obscured ownership that crosses borders, is not publicly listed or represented, or involves more than one company or layer of directorships.

More than ever, it is critical to understand who you are dealing with. As criminal masterminds become more sophisticated and their techniques for covering their tracks continue to evolve, the burden on fraud fighters increases. They are tasked with unravelling the complex web of corporate identities, created often with the sole intent to disguise the UBO. Technology is making it easier to create clarity and integrity in financial data. But first, it’s important to understand the intricacies of how these entities can be structured.

What type of structures are there?

There are many ways that corporations can be structured. Some are simple arrangements with wholly owned entities and registered shareholders. Or they can be behemoth conglomerations with cross-border registrations and circular ownership structures. Or they can be somewhere in between.

In simple terms, a complex corporate structure is one where the UBO is not immediately identifiable. For example, the company might have several layers of corporate officers and shareholders, or overseas companies may be included in the ownership structure.

In this article we will put forward four relatively simple examples of structures as a starting point – direct, indirect, multi-level indirect and circular – however, it should be noted that large organisations, particularly ones set up with the specific intention of disguising the UBO, will comprise all of these structures and more.

Below we have provided some examples of how each type of structure may look. Let’s start with the simplest – direct ownership. 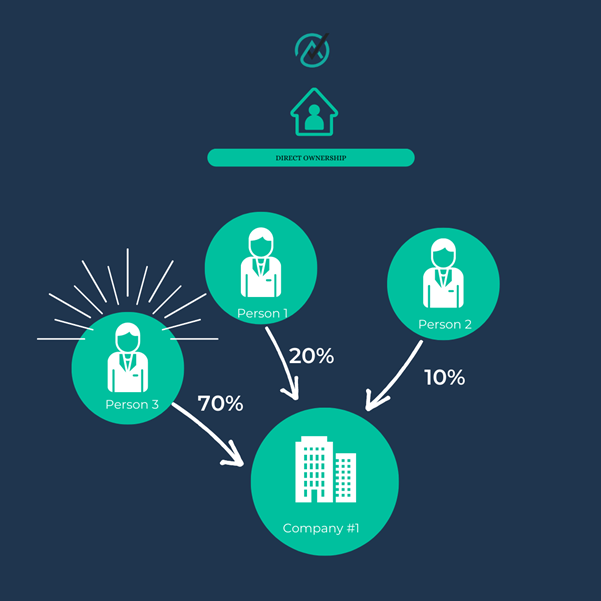 In this image, the company is owned directly by three individuals. Person 1 owns 20%. Person 2 owns 10%. Person 3 owns 70% and has the controlling interest in the company. In this example Person 3 is the UBO. Simple! 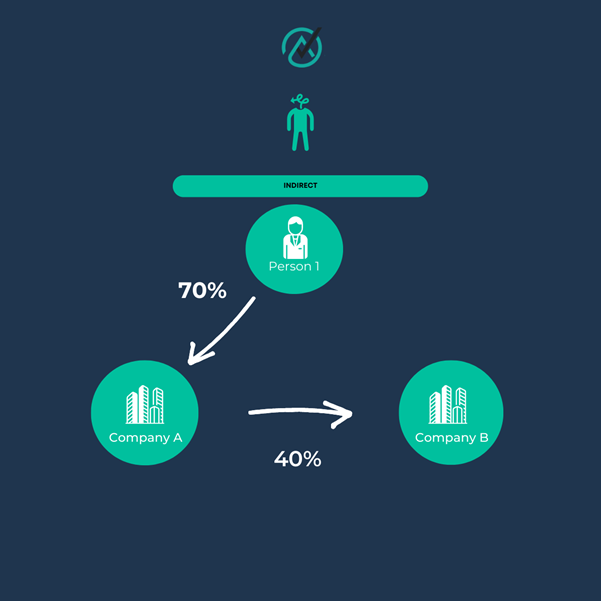 But suppose Company A is registered in Singapore and Company B is registered in China. A simple company search in Singapore will not immediately determine the UBO. Uncovering the UBO becomes that much more complicated. It’s important to note also that Person 1 may not be the only UBO of Company B. More information is needed.

Multi-level indirect ownership is when things really start getting murky.

The diagram below is only three levels for simplicity but imagine it expanded out to as many as ten or more levels, with a combination of company holdings, trusts and partnerships forming part of the structure.

Determining who the UBO is in these larger scenarios is where it starts to really take time, especially where the structure spans multiple countries and different languages. 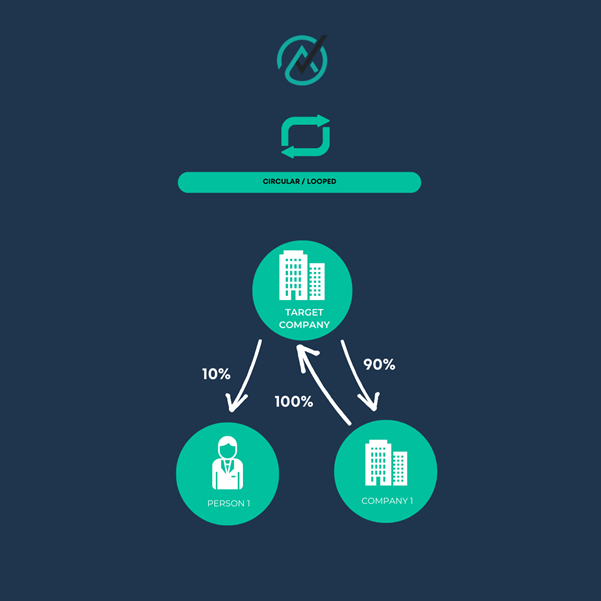 It should be noted that circular (or looped) circular ownership structures are a form of multi-level indirect shareholding, and are not legal in all jurisdictions. This is due largely to their capacity to mask the true ownership structure of an entity.

These structures occur when two or more entities within a corporation partially own each other. They may be closed or open, simple or complex, and typically are not easy to identify.

In the simplified scenario below it would appear that Person 1 owns a relatively insignificant 10% of the target company.

What is not immediately obvious is that the shareholder in fact owns 100% of each corporation. The distorting of this ownership structure can have a number of implications, including tax minimisation and evasion, the avoidance of sanctions and so on.

The identification of a circular or looped ownership should be treated as a red flag in the vetting process and at the very least, an indication that further investigation is required.

On April 3, 2016 11.5 million documents were leaked online, orginating from former Panamanian law firm and professional services firm Mossack Fonseca. The papers contained personal financial information relating to high net wealth individuals and public officials throughout the world, information that many of those involved would preferred to have remained secret.

The information was initially given by a whistleblower calling himself John Doe, to a German journalist, Bastian Obermayer from the newspaper Süddeutsche Zeitung (SZ),

As the information grew and Obermayer came to understand the enormity of what he was dealing with, the International Consortium of Journalists (ICIJ) became involved.  Journalists from 107 media organisations in 80 countries were involved.

More than 214,000 entities were identified in the documents.

While many of the dealings recorded were entirely legal, it was found that a number of the shell corporations were used for illegal purposes, including fraud, tax evasions and evading international sanctions.

According to an article published by Australia’s ABC at the time of the leak, “using complex shell company structures and trust accounts, Mossack Fonseca services allow its clients to operate behind an often impenetrable wall of secrecy…Clients can pay Mossack Fonseca extra to provide front people known as nominees so they can act as shareholders, directors or even the owners of the companies.”1

The fallout of the leak has been widespread and remains ongoing. An international arrest warrant for the founders of the law firm was issued in Germany in 2020 however Panama’s laws do not allow for extradition of their citizens.

German-born Jürgen Mossack and Panamanian Ramón Fonseca were charged with being accessories to tax evasion, and forming a criminal organization. They were tried in a Panama Court on related charges. They were acquitted in June this year.

How AsiaVerify technology is making it easier to understand the company structure.

For those at the coalface, unravelling the complex corporate structures and following the sequence of shareholdings and directorships to determine the UBO is a tedious and time-consuming process.

AsiaVerify is transforming business verification across the Asia Pacific region (APAC), helping businesses overcome the challenges of conducting business across borders, languages and cultures and enter Asian markets with confidence and ease.

AsiaVerify is committed to bringing you the latest in AI powered technology, cutting through bureaucratic red tape and providing instant access to APAC’s most comprehensive business, customer and ultimate beneficial owner verification data, sourced from the most authoritative government registry information across Asia, all fully translated and in real-time.

Want to know more? Speak to one of our multi-lingual regulatory experts, or book your free demo to find out how AsiaVerify can solve your compliance challenges <contact form link here>.

Digging deeper, why is finding the Ultimate Beneficial Owner important?

All Aboard the Digital Train

What You Need To Know About UBO: #4 The Lay of The Land